What a way to start the year! Hot rods, hot days and some hot pool played at this year’s Kumeu Classic Car and Hot Rod Festival. Up for grabs was a 7 ft Valley pool table to anyone who could beat 5 of our top players; there were a few close calls where I had to bring in the big guns to save the table.  At $2 a shot, four handy players went close to winning the table with one player on his fourth win, with ball in hand, 2 balls in the open and the black.  It was lucky he fouled because I would have been the 5th player and under a lot of pressure as I hadn’t even stepped in the arena once for the day. Well done to the teams that are representing Massé in the states this year that showed up and defended all the prizes and a special thanks to all Massé players who attended. Next year we will do the same selection format and make this an annual event for the touring teams to the USA. A big thank you to Tony Van Wijk who helped make this possible and drawing the crowds, sometimes 4 deep while he was on the mic!  Thanks also to Rachel Murray and Kim Cullen for all your input and help on the day and Werner Fontein for sponsorship of the shirts.  With over 200 games played, fun was had by all doing something we love.  All money raised is going to support our juniors with their trip to America. 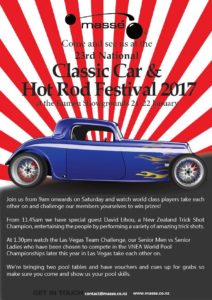