Home » Massé bring back the VNEA Leagues for 2017

Massé bring back the VNEA Leagues for 2017

Starting on the 20th of February 2017, Massé Hamilton, Glen Eden and Pukekohe will be commencing their VNEA 8 Ball Leagues every Monday night at 7pm. Not only are there great prize pools of a minimum of $5,000 each season, but you compete for a chance to represent New Zealand at the 2018 VNEA World Pool Championships in Las Vegas where New Zealand finished second to Germany in the Teams World Cup in 2016! Flights, accommodation and fees for the New Zealand team are all sponsored by Massé. The league nights consist of two rounds per night with a $5 entry per round. You must have a team of 4 people to enter but don’t worry, if you’re struggling to put a team together just let us know and we will make one up for you. To register, email tournaments@masse.co.nz before the 17th of February with your team or your interest and be ready to pot some balls on the 20th. 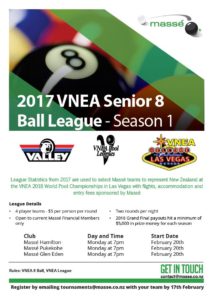