Massé Clubs – Hamilton, Pukekohe and New Lynn are hosting the 2017 Predator 9 Ball Tour. The weekly leagues for each club are listed below. Guaranteed $100 Prize Pool in the weekly in-club tournaments and a minimum of $1000 per regional tour stop!

Weekly leagues are on

Tournaments have a $1000 MINIMUM PRIZE POOL are they are held on the following dates: 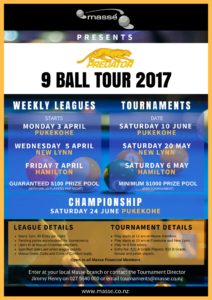 Enter today at your local Massé club or contact our Tournament Director Jimmy Henry on 027 5640 000 or email tournaments@masse.co.nz