Mario Hildred – World U18, U21 Snooker Champs China is the 33rd and latest Massé member to be representing New Zealand and Massé on the international stage! Looking sharp in his uniform, tomorrow Mario travels all the way to Beijing, China to compete in the World Under 21 Snooker Championships.

END_OF_DOCUMENT_TOKEN_TO_BE_REPLACED

BEAT THE WANTED TO WIN THE BOUNTY

BEAT THE WANTED TO WIN THE BOUNTY
Come along to the 2017 Massé Bounty Hunter Tournament that takes place at Massé Pukekohe on Saturday 22nd July!

END_OF_DOCUMENT_TOKEN_TO_BE_REPLACED

Tony Vittle put a stop to Marvin Padrigo’s runaway win streak to win Masse’s NZ 9 Ball Championship. Tony peaked at the right time beating Joe Pologa 7-1, the talented KD Singh 9-3, and then taking the championship in a nail biting final 9-8. It would have been Marvin’s 15th straight win and his 3rd major tournament win in a row, but it seems like he has a boogie man. In the final Marvin was up 8-6 and had many opportunities to take the title but stumbled a the last hurdle. As for Tony, he just sat back and kept the pressure on by going frame for frame and punished Marvin’s every mistake. In the end Marvin missed a getable shot to gift the championship to Tony. 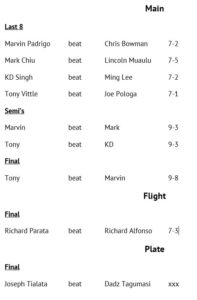